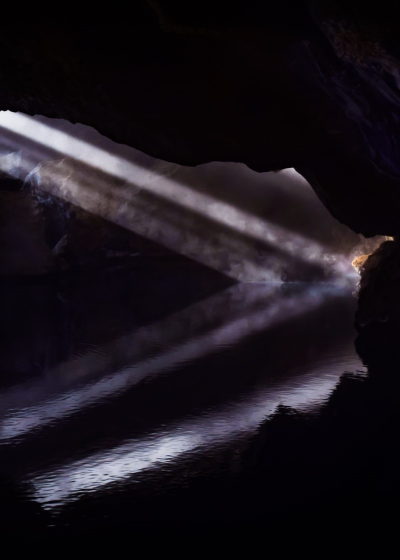 Prologue Chapter 1: Before I Knew the Ending Chapter 2: No Turning Back Chapter 3: Transition Epilogue

In the world of Tales from the Other Worlds

Visit Tales from the Other Worlds
Completed 1034 Words

Chapter 1: Before I Knew the Ending

Nothing but bones. Almost ten years of research and these ruins before me turned out to be nothing but a sea of bones. The amassed treasure of a lost order or an unsullied tomb would have been nice. This chamber was supposed to hold my big score.

The surface of these ruins was overgrown; indistinguishable from the surrounding woods. No wonder it had gone undiscovered since the Collapse. Thankfully, the lost cult I was following had been quite particular about the position of mountains and the sunrise. Finding an entry below the surface proved trickier, but evidence of the former civilization finally appeared as I descended, and for a few days, I had faith in my plan.

The reports that had drawn me to this place told of a central gathering hall built over generations, hidden from the world. A deciphered text, one of my proudest achievements, described the room's construction. Built below the ancient city, its high domed ceiling was so thick "even the gods could not hear what transpired within", an arrogance typical for the age. Walls were carved with images of the cult's former leaders, arms wide, welcoming those who would "accept release from worldly possession". Those worldly possessions; that's exactly why I was here.

It wasn't until I reached this ornate chamber, with its stone altar standing in the cavernous center, that I knew I'd found the object of my search. Yet, no centries old riches awaited me. Instead, countless unburied skeletons formed the landscape, many in pieces, some wearing scraps of yellowed linen. The scene of mass chaos in tableau was horrific. This wasn’t what I was supposed to find.

After a long and tedious descent to the depths of the ruins and a last drop that was… quite a bit further than my longest rope, I was certain the site would be untouched.

When you get to my level in this business the dangers aren’t the unstable floors, underwater caverns, ancient traps, and animals that live exclusively in the dark. A bit of preparation and experience is enough to identify a wrong path. The bloody corpse of a would-be adventurer provides one not-so-subtle marker as well. If some fool hasn’t set off the traps already, they probably aren’t working anyway. As it turns out, most ancient people didn’t know how to make snares to survive the ages. And if you can’t deal with the odd oversized rat, you shouldn’t be in this business.

No, when you get to my level the real danger is the other treasure hunter, with legitimate experience and skill, who got there first. It’s just a risk we take in this line of work. Or, at least a risk I used to take.

You see, any clever information broker will sell their clues and maps half a dozen times. Over the years I’ve been lucky and arrived at a site first, or at least first with the skill to recover anything valuable. Finding a body or two along the way with equipment and a copy of your map still intact is usually a good sign that you’ll be the one to walk away with the spoils. Finding a picked over body three days into your journey, that's when you know someone beat you to it. The experienced delvers walk away. But I am flawed. I never walk away; stubbornness is my curse. I’ve wasted plenty of time and resources when I was certain there would be nothing left, and I’m nearly always proven right. But every once in a while…

Rather than let my flaws, and the cheating information brokers, get the better of me I changed tactics. My parents had given me a very expensive education so I finally put it to good use. I went back to university, worked my way up, got tenure, and eventually my own department. Professor of Antiquities had a nice ring to it, and it gave me everything I needed to do my own research: library access, undergraduates who had no interest in getting their own hands dirty, and regular income even on my trips. All I had to do was tell stories to students, most of which were true, and bring back the occasional valueless item. I, of course, kept anything worthwhile for myself.

So there was no reason this trip should be a bust. The site had been all my own research; information pieced together from previous raids of untouched ruins. One of them was even at the bottom of a sea. The trip had cost me half my savings and a six-month sabbatical, but it’s where I found the final piece of the map. No living soul had been in that underwater tomb for a thousand years.

My research had discovered an ancient cult that was trying to defy death, which seems to be what all cults do. What I wouldn’t give for a cult that simply wanted softer beds or representative government. It’s not like they had achieved their delusion. Everywhere this decade-long journey had taken me I found maliciously laid graves and the occasional jewel-encrusted precious metal disc; presumably part of a ritual that failed utterly to grant immortality. Obviously, I cared about the trinket. The few I’d recovered in salvageable shape were worth… let’s just say it was an incentive to keep me on the trail. That, and the records depicting their ritual; hundreds gathered wearing these discs as headpieces kneeling before an altar of gems and gold that radiated light and connected them all. Typical immortality crap, but if it brought a lot of ancient people and all their unbelievably valuable belonging together for a ritual sacrifice, who was I to complain.

So why wasn’t any of it here? The bones, sure. There had obviously been a gathering here. The pallid outcrop in the distance surrounded by what was probably more bones looked vaguely like the altar I expected to find. Still, I should have left. Right there I should have started my long climb back to the surface, but I just couldn’t leave it alone. What harm was there in exploring this cavern? Maybe the treasure was buried just a bit deeper.

That stubbornness finally got the better of me.